Difference between revisions of "ConferenceRooms/Solstice"

From UMIACS
Jump to navigation Jump to search

Solstice is a wireless and content sharing solution. It enables multiple users to connect simultaneously to a shared display using laptops and mobile devices over an existing wireless network without the need for cables or additional hardware.

All conference rooms in the Brendan Iribe Center and some in the Atlantic Building are equipped with Solstice Mersive Pods. 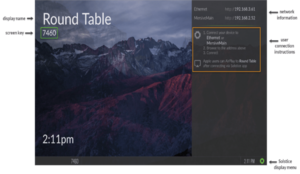 How to Connect to a Display

If your organization has enabled streaming with Miracast, users without the Solstice user app can connect and share their screen to the display using Miracast capabilities on their Windows device.

Screen mirroring on an Android device may not support audio streaming.